I cannot say that I am happy coming back from the World Champs being beaten in the first round but overall the tournament was a great experience. Here is a brief report on my experiences at the 20th WKF World Senior Karate Championships.

After many years of hard training, a month of rushed fund raising  and 36 hours of traveling, I was finally at my first World Championship in Belgrade Serbia. 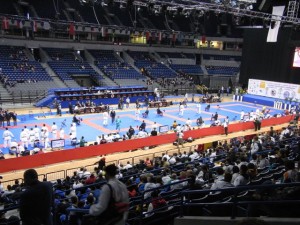 The arena that the tournament was held at was enormous, one of the largest indoor stadiums in Europe. Inside, the atmosphere was quite overwhelming as I had expected. In the warm up area there were over 50 male and 50 female competitors all going through their warm up routines and running through their Kata (performance) in the tiny amount of space they could get. Everyone was very pushy, caring solely about themselves. i knew I wasn't at a New Zealand tournament anymore! I wasn't first on the draw so after we were called out onto the competition mats to bow to the referees I went back to the warm up room and found a lot more space.

My Kata was feeling great, the best its ever felt and I wasn't much more nervous than I am at tournaments back home. I was confident after seeing my opponent warming up than beside me that i would make it through the first round. But as soon as I walked out onto the competition mat to start my Kata I could feel the palms of my hands and the bottom of my feet getting wet with sweat and my legs starting to shake. Its not a feeling I've never felt before but it certainly was the most nervous and tense I've felt while being on the mat. He did his Kata first and i turned away to concentrate on my own and not worry about him. I did my Kata after his but i couldn't get anywhere near as much speed on it thanks to my muscles tensing up! I was telling myself throughout the whole Kata that I just need to relax but it didn't seem to help much. I ended up slipping on one of the easiest moves not to slip in and that ended up deciding the match. The flags went up (5 judges each vote on the competitor with the superior Kata - better technique, faster, stronger, better balance) 2 were for me and 3 for him. A few weeks prior to this I was telling myself I would be stoked to win one round (only 2 Kiwis have ever won the first round at the Senior Worlds) but now that I knew how much better I was and that i had put out a terrible performance and slipped and still got 2 votes I was devastated. 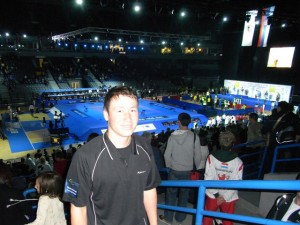 Although I really should have won that match I know it was down to the fact that I hadn't had the same or even a similar experience before of competing at a big competition. The competitors living in Europe can enter huge tournaments almost every week and can get there within a few hours but living in isolated little New Zealand its a bit harder to get to many competitions. Going to the Senior Worlds at 17 was definitely putting myself on the right track and after experiencing it all I'm confident I will be a lot more composed and relaxed next time. I still have many more years to compete, just to put it into perspective my opponent was 24 and the finalists were 30 and 34. The 34 year old Italian was the champion from the last 3 worlds and the 30 year old Venezuelan who won it was going for his first title since competing in the Senior Worlds at the age of 16, slowly making his way through the rounds.

The whole trip was an amazing experience, not just the few minutes I had on the mat and learning from it but also watching the other more experienced athletes and my idols, getting to meet some of them in person, and the experiencing a different culture and a new continent for me. I had a lot of fun after I finished competing, made tons of friends and although I'm not sure about ever going back to the depressing country of Serbia, I am really excited to train up for and get to the next World Champs!

Once again thank you so much for helping me get there and I hope to do you proud in years to come!